Dick Brookz has been an edu-tainer his entire life. His school assembly programs have taught and entertained tens of thousands of youngsters throughout the years.

He uses special effects, trained animals, magic and illusion to point up the various object lessons in his performance. Areas covered include good citizenship through protecting the environment, the dangers of smoking tobacco and using drugs, the value of hard work and determination, and how the good you do comes back to you. He encourages his audiences to use imagination and concentration to reach their goals.

Dick Brookz is also an author and publisher, having been writer and editor of Hocus Pocus Magazine for over three years and author and inventor of several books and magical effects.

He was founder of the famous Magic Towne House on the upper East Side that brought magic to the city for over 15 years. Those who performed or visited the venue include Johnny Carson, David Copperfield, Harry Blackstone, Jr. Penn & Teller, and others. Wanting a larger facility and a place to house his collection of Harry Houdini memorabilia he opened The Harry Houdini Museum in the Scranton- Wilkes-Barre-Poconos- Pocono Mountain region of North East Pennsylvania.

He has been hired for major society parties by Diana Ross, Brooke Shields, Carly Simon, John Lithgo, David Merrick, Stevie Wonder, and others

Just a few of the major corporations who have enlisted his services include Maidenform, First Boston, Frito-Lay, Yago Sangria, Coleco, Pool Trol, .

Our travels take us mostly the Pennsylvania, New Jersey, New York, & other states on the East coast. 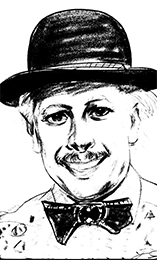