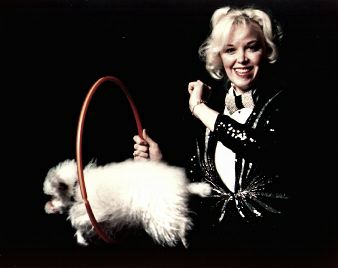 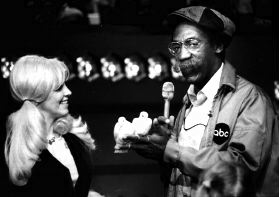 The photo session that made the famous poster of lady magician, Dorothy Dietrich, the First Lady of Magic, possible.

It tells of historic magic done by the woman magician often called "the world's leading female magician," "the first lady of magic," and "The female Harry Houdini. A long list of things Dorothy Dietrich has done are unprecedented in the history of magic and has made Dorothy Dietrich the best known female magician and celebrity in the field. Dorothy Dietrich holds a world's record for doing the straight jacket escape from the bottom of a parachute ride hanging from a burning rope. A feat never done by Houdini or any other man or woman since. She is also the first woman to catch a bullet in her mouth. This presentation was done with a metal cup in her mouth, since replicated by Criss Angel and David Blaine, but no other female. Dorothy Dietrich has paved the way for future female magicians in the magic and escape artist field.

Dorothy Dietrich, one of the best known woman magicians in the world, is on the list of Board of Directors of the Harry Houdini Museum. An feature story in the New York Times said "Dorothy Dietrich essentially is a magician - on the strength of her televised stunts, could claim preeminence to Harry Houdini, the first woman to saw a man in half, the first woman to catch a bullet in her mouth"

Dorothy Dietrich also helped found New York City's Magic Towne House, a world famous magic show spot and magicians meeting place for some 13 years. She developed a ong list of signature routines there such as the Strait Jacket escape, sawing a man in half. and was an editor of Hocus Pocus Magic Magazine for three years.

Magician Dorothy Dietrich America's formost lady magician with some of her pet animals.

some of Magician Dorothy Dietrich's list of television appearances that included The jinxed bullet catch, the straitjacket escape and sawing a man in half..

The Female Houdini, Dorothy Dietrich doing the daredevil style upside down StraightJacket Escape 150 feet above the earth suspended from a burning rope after being put in by police and security guards. The only woman in history to do this stunt, never done by Harry Houdini or any other man or woman.

Female Magician Dietrich doing the famous jinxed bullet catch stunt at Resorts International, the stunt that has killed twelve men, and injured many others. She is the first and only woman to ever catch a bullet in her mouth. Dare devil/magician Harry Houdini refused to do this stunt!

The Harry Houdini Museum attractions in Scranton, Pennsylvania PA, near Wilkes Barre in the Pocono Mountain or Poconos Mountains region features Harry Houdini's biography and quotes and is near many resorts, hotels and motels where tourists spend their vacations. The Harry Houdini Museum is run by the First Lady of Magic, also known as the World's best known woman magician, and The Female Houdini, Dorothy Dietrich./h1>