Harry Houdini Biography & Quotes: Biography - the most famous magician of all time. 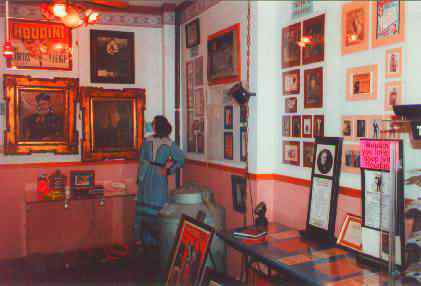 Biography: Being Jewish Harry Houdini's parents spoke only Yiddish, Hungarian, and German. The family of Harry Houdini was poor so the children began to work at an early age. From the age of eight young Ehrich Weiss (Erik Weisz) sold newspapers and worked as a shoe shine boy. When coming to the United States there were often many spellings of names as families adjusted to English. At the age of 12, young Ehrich left home - Appleton to make his way in the world & to help support his family. A great sign of independance. Many biography links wrongly claim Harry Houdini was overly obsessed with his mother. However Harry Houdini did love her very much.

Biography: Harry Houdini moves to New York City at the age of 13.

"My Brain is the key that sets me free."

"The greatest escape I ever made was when I left Appleton, Wisconsin."

"What the eyes see and the ears hear, the mind believes."

Magic is the sole science not accepted by scientists, because they can't understand it.

"The easiest way to attract a crowd is to let it be known that at a given time and a given place someone is going to attempt something that in the event of failure will mean sudden death."

How the early priests came into possession of these secrets does not appear, and if there were ever any records of this kind the Church would hardly allow them to become public.

"My chief task has been to conquer fear. The public sees only the thrill of the accomplished trick; they have no conception of the tortuous preliminary self-training that was necessary to conquer fearÉno one except myself can appreciate how I have to work at this job every single day, never letting up for a moment. I always have on my mind the thought that next year I must do something greater, something more wonderful."

I have spent a goodly part of my life in study and research. During the last thirty years I have read every single piece of literature on the subject of Spiritualism that I could. I have accumulated one of the largest libraries in the world on psychic phenomena, Spiritualism, magic, witchcraft, demonology, evil spirits, etc. some of the material going back as far as 1489, and I doubt if any one in the world has so complete a library on modern Spiritualism, but nothing I have ever read concerning the so-called Spiritualistic phenomena has impressed me as being genuine. It is true that some of the things I read seemed mystifying but I question if they would be were they to be reproduced under different circumstances, under test conditions, and before expert mystifiers and open minded committees. Mine has not been an investigation of a few days or weeks or months but one that has extended over thirty years and in that thirty years I have not found one incident that savoured of the genuine. If there had been any real unalloyed demonstration to work on, one that did not reek of fraud, one that could not be reproduced by earthly powers, then there would be something for a foundation, but up to the present time everything that I have investigated has been the result of deluded brains or those which were too actively and intensely willing to believe."

"I do not believe that ghosts or spirits exist."

© 1993 - by magicusa. Except for reviews, no part of any of this document may be reproduced or quoted in any form, without written permission by the authors. This does not include a limed amount of quotes that are credited. The graphics have been retouched, computer enhanced and resized by the authors. Here is our email address. We are more likely to get it if you put the subject in Caps.